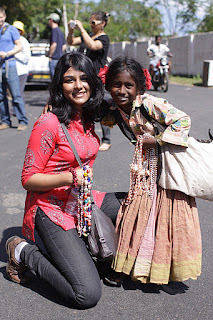 A month ago we were in Gurgaon and Delhi, on the last leg of our trip, wondering whether we have “taken in” enough of India to say something meaningful about the world’s largest democracy. Fearing that we hadn’t seen enough “people”, some of us scurried off to overly-crowded shopping areas such as Chandni Chawk and New Market, before joining the group at Nizamuddin’s Darga. “We will see ‘real India’,” we told ourselves.

A month has passed and I wonder, have we seen real India? What is real India? Who is a typical Indian? And here, I have to falter, as I process the images of the various faces we encountered:

• The bus-attendant who put out a stool and held our arms as we got off the bus every time.
•The bus driver who only smiled as we got on or got off.
• The various guides we had, each with different accents, but with grand stories about the places we were visiting.
• The street vendors who would not leave us alone.
• The coconut-water-wallah who gave me a brown coconut although I wanted a green one.
• The road-side chai-wallahs who thought I was an NRI (non-resident Indian).
• The road-side candy-wallahs who were surprised that all I wanted was aam-goli.
• The auto-rickshaw driver whose family moved from Pakistan in 1947.
• The store-owners in Chandni Chawk who said, “How the hell did they get in here?” referring to the group of four women who did not look like each other at all (Carolyn, Beth, April, and I)!
• Other store owners in Chandni Chawk who took us through alleys and winding stairs to their stores to show us beautiful sarees.
• The rickshaw-wallahs who were bemused by 27 foreigners riding rickshaws to Jama Masjid.
• The women in the “women only” section of the train who giggled watching Chris make self-deprecating comments about ignorant Americans to justify his presence.
• The half-naked priests in various temples who blessed us with garlands and rose-petals.
• Fully-clothed priests who offered us Prasad in the form of cookies.
• The hotel staff who were always, without fail, very courteous and helpful.
• The researcher who was very polished and well-spoken.
• The Colgate alum who started a new tourism company.
• The people in the “Muslim areas” who dressed very differently.
• The local tourists who were posing for photographs every now and then, very much like many of us.
• The “student” who was not a “guide” (but he was!).
• The group of protesters who looked like they were at a fair, having a good time.
• The tout who wanted to show me an elephant.
• The little girl who managed to sell me five necklaces, five pairs of anklets, and also got me to buy her ice-cream (she's the one in the picture; photo credit: Chris Henke).

I realize I can go on and on about the faces of India. And I also realize there is no one face. We probably have some notion of what a typical Indian looks like or is like, but that is also probably a constructed image that we have created out of the snippets of information we have on India: call centers, Bollywood, insurgency, Kashmir, IT, computers, Slumdog Millionaire, and so on! In a way, we really haven’t seen “real India,” but is there a “real India”?

Photo: Girl with the necklaces by Chris Henke.
Posted by Navine Murshid at 10:17 AM