WWKMS? (What Would Karl Marx Say?) 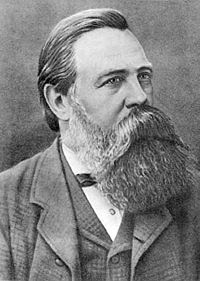 I have to admit that I have never been comfortable doing non-academic public writing. I have never blogged before. So, with your indulgence, I am going to warm up to the enterprise of interesting and approachable traveloging by writing about Karl Marx.

Never fear, though: I have enhanced my blog entry with this endearing photo of Friedrich Engels!

There is no longer an official caste system in India. It was outlawed in the 1950 Constitution of India. Yet, the issue of caste still features prominently in the minds of many Americans, and, as a recent New York Times article reveals, it endures in subtle and surprising ways within Indian society.

As the NYT puts it, “certain cultural affinities remain” between caste and career paths in India such that it is often still difficult for people with certain surnames and/or family lineages to break into prestigious careers.

In recent years, however, capitalism has changed this. To some extent, anyway.

“Because of the new market economy, material markers are replacing social markers. Dalits can buy rank in the market economy. India is moving from a caste-based to a class-based society, where if you have all the goodies in life and your bank account is booming, you are acceptable.”

Even if my trip to India didn’t have the Core curriculum at its center, a quote like this would inevitably bring Karl Marx to my mind. In 1848, Marx (and poor, neglected Friedrich Engels, of course) claimed that capitalism tends to eradicate traditional social stratifications. In place of the “complicated arrangement of society into various orders,” it creates “two great classes directly facing each other – bourgeoisie and proletariat” (Communist Manifesto, Section I).

According to the NYT, this leveling quality of the free market is an example of “the messy and maddening road to progress in India.” I doubt that anyone would dispute the felicity of the social empowerment of India’s Dalits. Who wouldn’t view such a development as “progress”?

Well, Marx and Engels, for one, couched their analysis of modern society in a recognition of the ambivalence of capitalism’s leveling logic. This logic, they observed,

has pitilessly torn asunder the motley feudal ties that bound man to his "natural superiors", and has left no other nexus between people than naked self-interest, than callous "cash payment". It has drowned out the most heavenly ecstasies of religious fervor, of chivalrous enthusiasm, of philistine sentimentalism, in the icy water of egotistical calculation. It has resolved personal worth into exchange value, and in place of the numberless indefeasible chartered freedoms, has set up that single, unconscionable freedom – Free Trade (Ibid).

I’m not sure how to come to terms with the tension articulated here, but I hope that this trip will afford me the opportunity to think it over in the company of some interesting people.

What do you think?

Posted by Jenna Reinbold at 1:56 PM