In India one becomes used to manifestations. The main gods are Brahma, Shiva, and Vishnu, and each has its own spirit: Shiva is the bad boy who acts first and asks questions later; Vishnu tries to maintain the status quo. But even Shiva and Vishnu, along with the Creator Brahma, are manifestations of the one Divine. Each of these gods has many manifestations: Vishnu, for example, is sometimes manifested as Varaha the Boar, who saved the earth from the ocean. The avatars of the various gods vary dramatically in form, but they all maintain the spirit of their god. For example, Varaha the Boar acts to preserve, as does Vishnu and his other avatars. 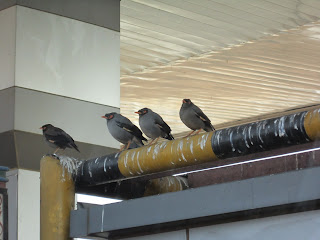 Learning about this spiritual view on our trip prepared me to recognize a manifestation of one of my favorite spirits. Our group was enchanted by a gregarious bird that congregates in large flocks all over India.

It gathers in agricultural areas, eating spilt grain meant for livestock, and riding on the backs of cattle to eat parasites. It is found in large numbers in cities where it eats any food dropped or left by humans. We first encountered it at highway toll booths, where it perches on man-made railings, and alights on vehicles hauling dirt and other loads, where it searches for insects, grains and other foods. These birds are omnivores, adapted to live in a variety of habitats. They are mynahs, and they live in large numbers all over India. The manifestation we saw was usually the Bank Mynah; another Indian manifestation is the Common Mynah -- they behave similarly. 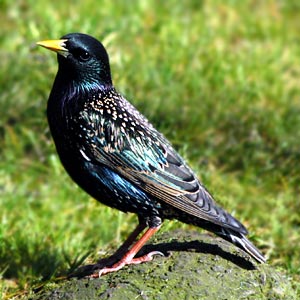 Although I had never seen this bird, it immediately seemed familiar. For many years I studied the European starling. In the US, the starling is viewed as a common bird, often a pest. But it is an immigrant success story. It was introduced to Central Park in New York in 1890 by Eugene Schieffelin, who wanted to introduce all the birds mentioned by Shakespeare to the United States (“Nay, I’ll have a starling shall be taught to speak nothing but ‘Mortimer,’ ” (Shakespeare, Henry IV, Part I)). Schieffelin released another 60 birds in 1891.

The range of the starling is now from east to west coast, and from central Canada to northern Mexico (some populations have also been established in South America). Starling population in North America is now well more than 200 million, all descended from the 100+ birds released in Central Park in 1890-91.The gregarious and mischievous bird that I know as “Starling” is here manifest as “Mynah”. Similarly, the Common Mynah, introduced to Australia in 1862, now has a population of 15 birds per square kilometer in Canberra, and is considered a pest bird. (http://www.publish.csiro.au/paper/MU97018).

In fact, both the European starling and the Common mynah made the list of the top 100 invasive species of the Global Invasive Species Database (http://www.issg.org/database/welcome/). The similarities between starling and mynah have not escaped scientific taxonomy. Both starlings and mynahs are classified as members of the family Sturnidae. 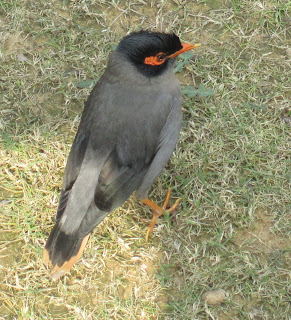 Other than their similar size and general body shape, these birds look very different. The Bank mynah is gray with a beautiful orange eye decoration. We were all attracted by the beauty of this bird, although I suspect that its commonness makes it less attractive to native Indians. The starling is blackish with iridescent highlights in summer, and brown with small white spotting in winter. It is also a beautiful bird, but not recognized as such by Americans.

It is not their appearance, but their behavior that gives them away as relatives. Just as Vishnu and his manifestations are recognized behaviorally -- whether man or boar, they all act to preserve -- Sturnidae is a noisy, jostling creature, comfortable with other animals, whether livestock or humans, making its livelihood in multiple ways. It will steal a nest from a bluebird, build its own, try to nest in a clothes dryer vent, or make a home in the eaves of your garage. In short, this bird is adaptable in a variety of habitats.

Why do I find myself so attracted to this bird? Is it because I studied it for 10+ years? Perhaps, but my admiration for it has grown over the years since then. In its Indian form it is an attractive bird, but people in the US often comment that the starling is ugly (Why? A case of familiarity breeding contempt?). But it’s not just my feelings about the bird; it was the cries of my colleagues on this trip that first attracted me to mynah, as they delighted in its bold behavior. I believe that our attraction to the bird goes beyond physical appearances.  It’s the behavior, the spirit of the bird that we admire.  Maybe this suggests a new taxonomy. It is Adaptāre, a verb, so fitting to the changing nature of these adaptive animals, that identifies this bird the best.

Are there more Adaptāre? Maybe we should look to the list of 100 Most Invasive Species. Surprisingly, Homo sapiens are not on it. Perhaps that is just another sign of our adaptability.


Adaptāre, in its moral and linguistic form, is well known for self–promotion. What other animals do we know that gather in large social groups, squabble, compete, adapt to a variety of circumstances, and seem to make their way wherever they go?  As a psychologist I speak of the behavior of the bird; others would speak of its spirit. Either way, when we look at mynah or starling, we recognize ourselves: Adaptāre.
Posted by Rick Braaten at 7:28 PM