Here I am finally writing about my experiences and observations from the first couple of days. I think that some of us were quite stunned by the amount of garbage along the roads since we arrived here. Seemingly everywhere you go, you see trash, trash, trash. The first picture was taken on the morning of Day 4 in Pondicherry.


It was taken on one of the commercial streets, running in front of the hotel. Clearly, there is a lot of trash. You can also see that the garbage dumpster is completely filled, indicating that the municipal government has not been able to keep up with the increasing demand for trash collection (and the cyclone may have resulted temporarily in the excessive amount of trash, but we did see a large amount of garbage along roads from Chennai to Pondicherry, too). One may also point out the lack of environmental education and ethics as an important factor of such a landscape. Surely those are important; yet, that may not be the entire story. 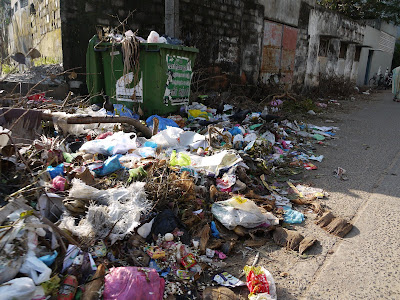 The second picture was taken on the same day, on a narrow alley just a block away from the site of the first picture. It seemed like a residential area, cluttered with small dwellings. The alley was clean, free of almost any trash. In fact that the alley was probably just swept and washed by the residents. So the trash was not everywhere. 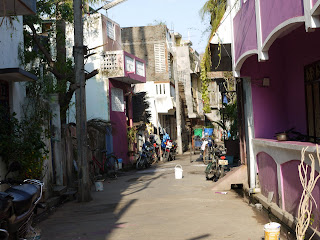 I could probably frame the difference in some sort of abstract language (e.g., who ‘owns’ the space, public vs. communal space, etc.), but the most real part of this experience was a simple fact that stepping into these narrow alleys gave me a quite different impression about the town.
Posted by Dai at 7:08 AM