Like many of my fellow travelers, I imagine, I have spent the days since we landed re-acclimating, trying to right a wayward stomach, to persuade my circadian rhythm of the fact of Eastern standard time. Many times the past few days I have been awake when I ought to have been asleep (and vice versa, of course) and it is in these waking moments that I have given the India trip my most sustained thought. Much of the thought has been intellectual, but some of it has been purely visceral. I have felt profound relief and gratitude opening the tap and drinking the clean Hamilton water.

If potable water seems a luxury, all the more so a pantry full of food and a warm house whose construction has long been complete. A stable internet connection—something that eluded me the entirety of the trip—seems positively decadent.

In other respects, familiar aspects of life at home have a foreign cast: more than once I have looked down the bed or the couch at the two big dogs that share my home and felt a disjunction. Could they really be the same animal as the hundreds and hundreds of “free-ranging urban dogs” I saw roaming the streets of India’s cities, lying atop sand piles at construction sites, and digging garbage out of dumpsters? Why, when goats and sheep dot the landscape around our village, when on average 26.43 cows live on every acre of Madison County farmland (alongside 0.167 people, in case you were wondering), did I find the livestock of India so riveting? 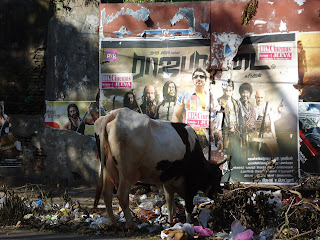 As I’ve mused a little on this, a short passage from Margaret Atwood’s The Handmaid’s Tale keeps coming to me:


“This is one of the most bizarre things that’s happened to me, ever. Context is all.”

The questions I’m asking myself have everything to do with context, with the ways that the familiar and the foreign can become inverted in different settings. I have never seen a cow - or a wild board, a goat, a monkey, or a family of pigs, for that matter - walk down a city street before.


This issue of context was particularly pronounced for me in another key way in India. Connie Harsh has blogged about decoding language on signs: she wrote about the struggle and reward of deciphering an unknown alphabet. For me, the sign with which I struggled most in India was one I already knew: the swastika. 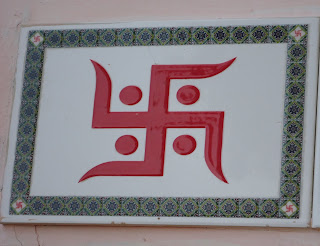 An ancient Sanskrit sign used to denote auspiciousness, the swastika appears frequently on buildings throughout India. Like many of my fellow travelers, I found it difficult to overcome the dissonance I felt seeing the symbol placed so prominently: intellectually, as a professor of religion, I knew what it was supposed to convey; viscerally, as a professor of Jewish studies, I knew too well what it had come to represent in twentieth-century Europe. With every sighting, I had to assure myself that this was a sign of welcome and warmth, not hostility and hatred. It is hard, and not always good, for the brain to override the heart, but in this instance there was a reward to being able to assess the symbol intellectually: when I managed to make the familiar sign foreign (indeed, to restore it to its original context), the swastika gave me an unexpected sense of security in a very foreign setting.