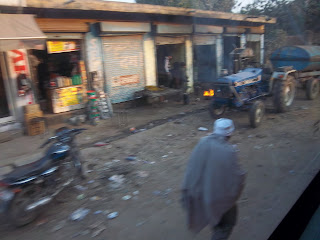 If I'd been asked to guess before our trip what scents I would remember most from India, I would have been wrong.

I probably would have guessed "curry," which would have been wrong in several ways, not the least of which is that "curry" isn't actually a food category in India; it's a word that's been imposed by Western culture to describe a wide variety of different Indian dishes.

I might have gone on to guess "incense", or, maybe, if I'd been thinking about the more negative stereotypes, "sweat," or, "urine."

The pervasive scent, the one that was almost overwhelming whenever I stepped outdoors on a 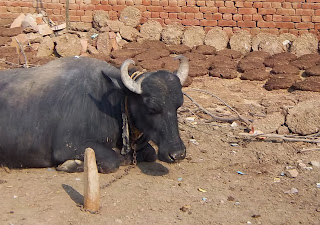 cool evening in North India, is smoke. In the rural areas, the smoke is from burning cow dung, which you'll see stacked in neat piles by homes. In Delhi, the smoke is from anything that will burn--bits of paper, leaves, sticks--and on the streets I saw families huddled around these small fires trying to stay warm.

These open fires are responsible for the haze that hangs over cities every morning, rendering pointless a dawn visit to the Taj Mahal because we wouldn't be able to see it through the smog. But the damage is much more than cosmetic.

According to the New York Times,


"Nearly three billion people in the developing world cook their meals on primitive indoor stoves fueled by crop waste, wood, coal, and dung. Every year, according to the United Nation, smoke from these stoves kills 1.9 million people, mostly women and children, from lung and heart diseases and low birth weight."

Additionally, open fires are remarkably inefficient, requiring more fuel to provide the same heating as a stove, and, since they burn at a lower temperature, much more soot is created, which is a major contributor to global warming.

The scientist in me says that this isn't such a difficult problem to solve. Efficient stoves can be built for about $10. That's a big investment when multiplied by a billion families, but the savings in fuel means that families can afford to buy one themselves, if they're offered a workable financing option. However, the social scientists tell us that the problem is more complex. Families won't use a stove if it's not compatible with traditional cooking styles. And if the man in the family controls the money, he needs a reason to invest in one beyond simply saving women's time collecting fuel. It's a complicated problem, but one that my trip to India convinces me that it's worth the investment to solve.
Posted by Beth Parks at 2:12 PM