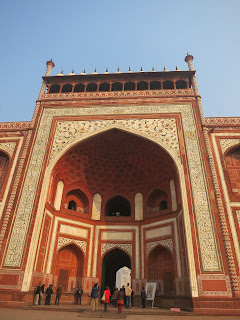 It is difficult to write something about Taj Mahal that has not been said already. Anyone who has been there knows that the photos and the postcards barely do any justice to this magnificent monument. It is something that must be experienced, not just viewed.

The only parallel I can draw is this: it is the same kind of sensation as you look up at the falls from the Maid of the Mist at Niagara Falls. The difference is that at Niagara Falls, there are two falls; the wonder of the Taj Mahal is really a series of wonders.

As you enter the first gate, you can’t see the Taj; its dome quietly enters the visual space as you move towards the main gate: the gates of paradise. If heaven could be on earth, it would look like Taj Mahal.

As the structure with the four pillars, with the pool in front and the mosques (one real, one a façade) on the two sides mirroring each other confronts you, you are transported into, yes, paradise! You can only gape in wonder as you move closer and realize how intricate the details on the structures are, how symmetrical the entire composition is, and how much effort, resources, and love must have gone into building it.

Apparently, the popular story about Shahjahan building this as a symbol of love for his wife Mumtaz is a myth; instead, it is for self-aggrandizement. Even if that may be the case, today it is certainly a place where lovers become starry-eyed, and irrespective of whether the true intentions had anything to do with the pain of lost-love, the Taj Mahal has become a monument of love. Yet, it is difficult not to think about mortality. Why do we wait until someone dies to really appreciate that person, and yes, build a monument in her honor?

If you have been able to keep thoughts of mortality at bay until now, you will no longer be able to as you reach the last gate, the gate through which you enter the tombs. The beautiful Arabic calligraphy reads something akin to “get prepared to meet your maker”. It serves as a quick reminder that death is perhaps the only thing in life that you can take for granted. “That and taxes,” as Eliza Kent said.

Food for Thought: How can we reconcile the anti-idol-worshipping stance of Islam with shrines that appear to do just that?
Photo: The Gate of Paradise by JKlein
Posted by Navine Murshid at 2:33 PM