Early in the trip, we went to Auroville, a utopian community started by a woman called The Mother to live by the teachings of a sage by the name of Sri Aurobindo. Sri Aurobindo was educated in Great Britain, but later renounced his active life and settled in Pondicherry. He died in the early 1950s. His spiritual companion, the Mother, led the community and supervised the building of the shrine you see here. 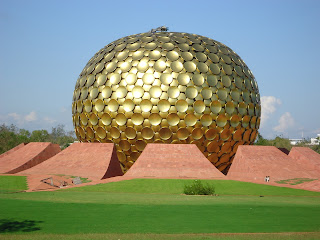 So we are in the museum, looking at materials about the Mother, whose name was Mirra Alfassa, and who is variously described as a Frenchwoman and an Egyptian. I take a look at her name and her biography--she was French-speaking; she studied mathematics in Paris and became involved with mystical thinkers whose names come back to me from graduate school a zillion years ago. I look at this and I think: Jew. A  Sephardic Jew. So I ask my two obvious colleagues, Lesleigh who studies Judaism and Bruce who studies Egypt and the Middle East. They think, hmm, maybe, maybe not.

Last night, almost a week after we returned, an old friend comes over (he is not connected to Colgate). He's really anxious to hear about Pondicherry. I had known, but never really focused on, the fact that he had had a close Indian friend, an associate of his father's, who took him to India in 1975 and was very important in his life. So it turns out that this Indian friend was a disciple of Sri Aurobindo. And there's my friend talking about The Mother, which is even odder because he's a complete Jewish atheist. Turns out he owns Sri Aurobindo's collected works, bound in silk, plus a letter from the Mother in her own hand. So, I say, was she a Jew? Of course, says my friend.

It's called pattern recognition. You hang around a field long enough, you start to understand what you are seeing.

If anybody is motivated or skeptical enough to check this out with google, what you'll find is that she is the French-speaking daughter of an Egyptian mother and a Turkish father. I can't authenticate what my friend said any further, but this is a classic Sephardic Jewish background. With lots of wiggle room for avoiding the uncomfortable.